Long before they were New, Dark, or Disassembled, the Avengers were far from Marvel’s biggest characters. While people liked Captain America, Iron Man, Thor, etc., they weren’t as popular as Spider-Man, the Fantastic Four, or the Hulk. For whatever reason, the Avengers just weren’t striking any chords with the comic book audience as a whole. There were fans, sure, otherwise the title would have been cancelled, but it was never a top seller, and just didn’t garner all that much attention. So it was a bit of a surprise when Roger Stern and John Buscema started a story that has become known as “Avengers: Under Siege”, and all of a sudden everyone was talking about the Avengers.

The line-ups for the Avengers have always been in a constant state of change. Each era has its stand-by’s, though. In the 60’s it was mostly Captain America. In the 70’s it was the Vision and/or Hank Pym. By the 80’s it was more B-list characters that usually grabbed the spotlight, like Hercules, the Black Knight, Crystal, or Captain Marvel (Monica Rambeau). The roster when this story opens is Wasp (team leader), Captain America, Black Knight, Hercules, Namor, and Captain Marvel. Also worth noting is the presence of the Avengers mansion’s butler, Edwin Jarvis. Before the Siege, Namor is forced to return to Atlantis to deal with some personal issues, and Hercules, pissed that the Wasp is in charge of him, goes off to get drunk.

The villains of this piece are the Masters of Evil, a group that had fought the Avengers previously, but with little success. Baron Zemo, the son of the original (and also a Captain America villain like his dad), has come up with a plan. He feels that overwhelming might and numbers should be enough to defeat the Avengers. So he puts together one of the most powerful groups ever assembled in the history of the Marvel Universe. The Masters of Evil line-up consists of Baron Zemo, Blackout, Tiger Shark, Mr. Hyde, Atlas, Titania, Yellowjacket, the Wrecking Crew (Wrecker, Piledriver, Thunderball, Bulldozer), the Fixer, Moonstone, and the Absorbing Man. Holy crap, there’s like a half dozen people in that group that can fight Thor to a standstill!

Zemo’s plan is relatively simple: Divide and conquer. The Black Knight is taken out away from the mansion, Captain Marvel is trapped by her own powers, Captain America is defeated at the mansion. This leaves Hercules and the Wasp. Gulp. Wasp tries to preach caution to the newly arrived Hercules (who is stinking drunk). All she knows is that there are intruders in the mansion and that something’s really wrong. Hercules is like “fuck all that”, and barges his way in. Bad move. He is promptly gang stomped so badly that he’s in a coma!!

At the hospital, the Wasp is freaking out, thinking the Avengers have been completely taken out, and on her watch. Here she meets her only backup: Scott Lang, the second Ant-Man. Thankfully, before they have to storm the mansion they receive another bit of help from the newly arrived Thor. He isn’t really thrilled to see what the Masters have done with the place, and commences with the beating of asses.

While all of this has been going on, Zemo has had Captain America, the Black Knight, and Jarvis captive. He has been beating on Black Knight and Jarvis just to piss off Cap, and it’s working. To watch his friends being tortured right in front of him while not being able to do anything is killing him. Also, the Masters have been making their way through the mansion, room by room, and just trashing the crap out of it. They’re going through everyone’s belongings and destroying or stealing them, including the last remaining mementos and photographs Cap has of his parents, his brother, and Bucky.

As far as the Masters know, the only Avenger left is the Wasp. They truly feel they’ve won, and begin to gloat a bit, and enjoy themselves. Of course, this blows up in their faces when a super pissed off God of Thunder arrives with his smiting hammer, but they don’t know that. Zemo even has the monstrous Mr. Hyde torture Jarvis for a while, which leaves Jarvis a pile of bruises and broken bones.

Even though you have a pretty decent idea of what is going to happen from this point, it’s worth noting how weird it is seeing the villains in the Avengers’ house like this. It’s like when Venom or one of the Osborns used to show up at Peter Parker’s house; it’s just unsettling. Seeing the likes of the Wrecking Crew going through Captain America’s personal belongings was infuriating to me when I was a kid. I wanted someone to destroy the shit out of those guys, but it made the story so much cooler when you thought the villains were not only winning, but it looked like there was NO WAY the Avengers could come back.

Eventually the Wasp shows up with her reinforcements, and they join the fight, freeing the Black Knight and Captain America. Zemo, realizing the day may be lost, goes to initiate his scorched-earth policy in case his plan failed. Thankfully for the Avengers, Dr. Druid showed up and helped save the day. If you don’t know who Dr. Druid was, think a less powerful, less responsible Dr. Strange. He didn’t have the same mojo Strange did, but he didn’t mind getting his hands a little dirty if he had to.

Anyway, I loved this story when I was a kid, and even today it stands as one of my all-time favorite Avengers stories. I highly recommend it, but should note that it was created in the 1980’s, so don’t expect it to read like a modern comic. Still, it carries some heavy emotional weight when it wants to, and left emotional and physical scars on its characters for years to come. 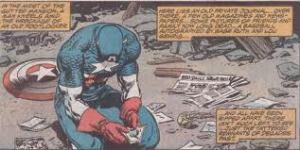