I have so many questions!

First of all, Satan is a tiny, winged, genital-less, cape sporting red guy that likes to jump through people’s windows to scare them? And people are apparently so used to this, or so generally jaded overall, that the reaction this chick has isn’t even “WHAT ARE YOU DOING IN MY BEDROOM!?” but a nonchalant “So?”

Second, why is he announcing himself like he’s Mario? “It’s me… Satan!” Who talks like that? Maybe it’s that kind of grammar, and a lack of pants, that force him to enter people’s homes through windows instead of through the door like a normal embodiment of evil.

Third, what is she reading? The front cover is just plain white with an off-center “Who Cares?” and the back cover is more white with off center “Who Dun It?” Shouldn’t those at least be reversed?

Fourth, “HOOOYAAARGH!!!”? What the shit is that?

So we covered the flawed, yet still pretty awesome, trilogy of Spider-Man films here, and while there was still plenty of room for stories to tell with the Tobey Maguire Spider-Man and the universe Sam Raimi crafted, Sony Pictures decided that Spider-Man 3 was to be the last installment in the series. They rebooted the franchise, and drafted director Marc Webb (kind of ironic) and cast Andrew Garfield as Spider-Man for the new series. The new franchise improved on the work the previous group did in a lot of ways, most notably casting and effects, and had some missteps of their own, which we will try to cover below.

Plot: Peter Parker is bit by a genetically modified spider gaining the proportionate strength and agility of a human spider. When his Uncle Ben is killed by a robber he could have stopped, he learns that ‘with great power must come great responsibility’. Now, as Spider-Man he must battle the monstrous Lizard to save the people of New York, and as Peter Parker explore his new relationship with Gwen Stacy while working with Dr. Curt Connors to learn more about the mysterious death of his parents and his father’s work they may have been killed for.

END_OF_DOCUMENT_TOKEN_TO_BE_REPLACED

There have been a lot (A LOT) of ‘what the fuck??!?’ moments in comic book history, especially when it comes to the super heroes of Marvel and DC Comics. But there is one project that, from top to bottom, just makes you want to scream it from the rooftops. No, I’m not talking about Final Crisis, or One More Day, or even Zero Hour or Heroes Reborn.

In the late 1990’s Marvel and DC were hurting. The speculator boom of the early part of the decade caused the industry to collapse on itself, and both companies were scrambling for direction and for ways to bring their lapsed readers back, not to mention brining new readers in. They resorted to some really bad crossovers, notably Marvel VS DC, which saw fights like Flash vs Quicksilver, Green Lantern vs Silver Surfer, Lobo vs Wolverine (sort of), Batman vs Captain America, and others. To say it sucked is an insult to all things that suck. 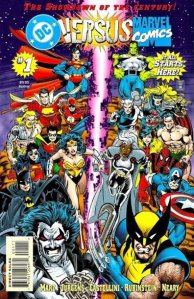 But they weren’t done.

On the heels of that they unleashed the Amalgam universe, which was presented by both companies (neither of you get a pass!) and featured combinations of their characters, so you had Batman and Wolverine combined to make the ridiculous “Dark Claw”, and other nonsense.

I’m the best there is at what I do, and what I do is suck!

END_OF_DOCUMENT_TOKEN_TO_BE_REPLACED

OK, so I know the 1990’s are kind of known for characters with big guns and pouches everywhere, and that the X-Men books were kind of the standard bearer for this, but I mean…. 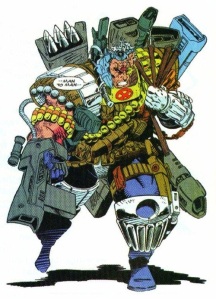 Come on. What the fuck? This is just ridiculous.

Hahaha what the fuck? 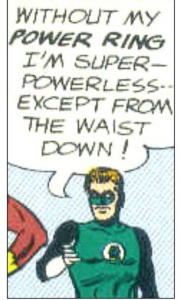