Easily one of the most famous Superman- hell, comic book- stories ever, the Death of Superman was a cultural phenomenon that re-shaped (for better or worse) mainstream comics forever. It’s been adapted into two (well, technically three) DC animated movies: Superman: Doomsday, The Death of Superman, and Reign of the Supermen, and kinda/sorta on the big screen in Zack Snyder’s Batman Vs Superman: Dawn of Justice (ugh that title). There was a pretty decent video game adaptation and more merchandise than you could shake a dead Superman at. But somewhat lost in all of the hype around the story is the fact that it’s actually pretty damn good!

So, sit back, put on your nostalgia glasses, and enjoy remembering the story about the world’s greatest hero being beaten to death. Good times. Here are 5 of the coolest moments from the Death and Return of Superman.

Doomsday for Superman (and the Justice League)
While the story is really about the fight between Superman and Doomsday, there is a tie-in issue in which the Justice League has the misfortune of running into Doomsday first. This is an odd line-up for the league; no Flash, no Batman, no Wonder Woman, Guy Gardner is sort of a Green Lantern I guess at this point, and the Martian Manhunter is pretending to be a guy called Bloodwynd. Otherwise, you get the Ted Kord Blue Beetle, Booster Gold, Fire, Ice, and Maxima. Maxima is plenty strong, and the others are great heroes, but they are every bit the match for Doomsday as you or I would be. Suffice to say, things… don’t go so great. 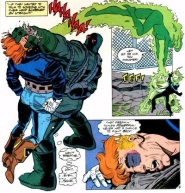 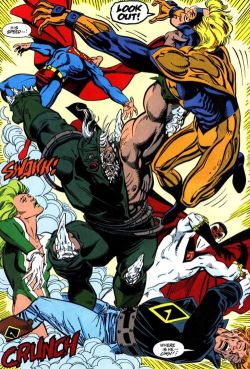 From there the action continues without the bruised, battered and nearly dead League as Superman and this skeletally-challenged asshole Doomsday take the fight across the dang country, ending in Metropolis. As violent and jarring as the fight with the League was, the drawn out brawl with Superman is somehow worse: seeing Superman take this kind of damage, and seeing him throw haymakers that would knock Darkseid around and this thing just taking them was pretty scary. Doomsday really is one of the scariest characters in DC comics, and if he had never made another appearance after Superman #75 he would still have that title.

Can you think of anyone else taking this kind of ass kicking from the man of steel and coming back for more?? 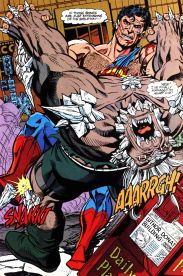 I mean, they just beat the living shit out of each other for four issues!!

Growing Action, Shrinking Panels
In each of the last 4 parts of the Death of Superman the panel count per pages shrinks. In Adventures of Superman #497 each page consists of four panels each. In the next chapter, in Action Comics #684, it was reduced to three panels per page. Then two per page in Man of Steel #19 and finally, each page a giant splash image in the action-packed finale in Superman #75.

While not immediately noticeable to some readers, it subtly and consistently amps up the pace and tension of the story as it nears its inevitable end. Keeping in mind the NAME of the story was the Death of Superman and every tv show, magazine and newspaper had made at least one reference to it at some point, it wasn’t a surprise how the story was going to end. In fact, knowing how it was going to end made the tension even worse: you didn’t want to see Superman die, and every issue, every page, every panel you were one step closer to what you knew was coming. Expertly done; and Dan Jurgens absolutely crushed it on Superman #75.

The Reign: Is Facially Challenged Superman the Real Deal?

So, DC had just killed their mascot; the first and greatest super hero and one of the biggest sellers in their library of titles. How to follow that up? Well, the questions started flowing in as soon as it was announced they were going to kill Superman: when are you bringing him back? So they decided, in a rather brilliant move, to bring him back right away. Or maybe not… They decided to have each of Superman’s four titles begin to feature a different Superman, each of which could be the real one back from the dead! It gave readers a terrific mystery and kept everyone hooked, introduced new characters Conner Kent and John Henry Irons, aka Superboy and Steel, and reintroduced Hank Henshaw and the Eradicator to an entirely new generation of readers. It was genius, I tell you.

Oh, What a Dick

Revealed to be a villain, he attacks Steel and Superboy, nearly murders the Eradicator, reveals he has conquered Mongul and Warworld, and nukes Coast City, home of Green Lantern Hal Jordan, killing millions. Previously kind of a throwaway villain, in one issue Hank Henshaw- the Cyborg Superman- became one of the greatest villains in DC history. And he did it wearing (at least part of) Superman’s face!

The Return of the One True Supermullet

When the real Superman made his triumphant return he showed up wearing all black, essentially powerless, and sporting a mullet that would make Kid Rock jealous.

While it really was nice to have the big, blue boy scout back soaring around in DC’s skies, for quite a while after this story something was off. I can’t quite put my mullet- I mean my finger- on it….