The first, and greatest, super hero, Superman has had a rather mixed bag when it comes to adaptations of his comic book adventures. There have been numerous television shows, radio serials, animated series, animated movies, video games, and live action movies, more of which were either just ok or straight up bad than good.

What is it about the big, blue boy scout that leads to so much crap?

You would think the elements that have been in place for 75 years now would be easy to adapt to the big screen, or the small screen. It’s not like there aren’t literally hundreds of pre-made stories in his publication history that are begging to be filmed and thrown on the screen, yet time and time again people think they can ‘improve’ upon the man of steel and his epically large library of awesomeness, and time and time again they fail miserably.

That’s not to say there haven’t been some success stories… “Superman: The Movie” was a high point, as were the Bruce Timm animated series and his representation in that same universe’s “Justice League” and “Justice League Unlimited”, as well as a handful of direct to DVD animated movies that did well. Zack Snyder’s “Man of Steel” may have divided some fans on its quality, but both Erik and I will go to our graves defending it.

But for each of those, there are Superman 3, Superman Returns, Lois and Clark, most seasons of Smallville and the dreaded Superman 64! It’s curious. And as bad as those are, you wouldn’t believe some of the utter shit that almost got made. (6 Terrible Superman movies, you won’t believe almost happened!)

For now, just to keep things relatively simple Erik and I are skipping 1951’s “Superman vs the Mole Men” and are only going to discuss the live action feature films, starting with…

END_OF_DOCUMENT_TOKEN_TO_BE_REPLACED

I’m not the world’s biggest Superman fan. I don’t normally read that many Superman stories, but I tend to gravitate towards the really good ones. There’s something about Superman; I would say that the best Superman stories just feel like there’s something extra special about them compared to any other character. Maybe it’s because he’s the first and the best, but really good creators tend to do their very best work on Superman, whether that’s Grant Morrison, Alan Moore, or whomever.

5. The Death and Return of Superman 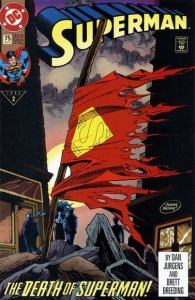 The thing people have to remember about the death of Superman is that nothing had ever hit the public like that from the world of comics. Not only was this story getting mainstream press every week, it was getting a LOT. Air time on Saturday Night Live, the Tonight Show, and pretty much every news show talked about it for quite a while. The creators and editors involved were made into instant pseudo-celebrities. It has since spawned video games, an animated movie, and a ton of stories. Its immediate follow-up, the Reign of the Supermen, created 4 new ‘Supermen’, 3 of which were still prominent figures in DC, at least until the recent line-wide reboot.

So to begin things off the creators introduced Doomsday, an unstoppable killing machine that would be the one to kill the Man of Steel. Doomsday effortlessly cuts a path of devastation across the country until he is confronted by the Justice League. Unfortunately for the League, they are utterly overmatched by Doomsday, even with one of his arms still tied behind his back. Literally. The dude has one of his arms confined behind his back and still punks the JLA out like they were a bunch of rookies.

Superman then shows up, and they proceed to destroy the hell out of each other and everything until at last they stop each other. With the last of his strength, Superman unloads everything he has into one last blow, which kills Doomsday. The effort from the punch, combined with the severe damage and injuries sustained during the battle, was just too much, and he dies in Lois Lane’s arms in the middle of the streets in Metropolis.