Oh, boy. Inferno is one of those stories that you either unequivocally love or hate. There’s really not much in-between. After the success of Fall of the Mutants and the Mutant Massacre, the next X-Men crossover, Inferno, actually spilled out into the rest of the Marvel universe quite a bit. You can find all sorts of titles that tie into Inferno, even books like Daredevil and the Amazing Spider-Man. 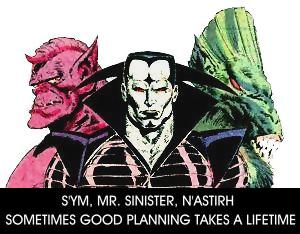 Story: In New Mutants, Colossus’ little sister Illyana Rasputin, aka Magik, had been kidnapped by demons in Limbo, and by the time they freed her she was years older and had spent years studying under Belasco, the lord of Limbo. The Illyana that came out was much different than the one that went in, and when the events in the other books come to a head, Illyana uses that opportunity to try to take over Limbo herself.

Over in Uncanny X-Men and X-Factor, there’s a doin’s a transpirin’! Jean Grey had died in the Dark Phoenix saga, and Scott Summers (Cyclops) eventually married a woman named Madelyne Pryor, a clone of Jean created by Mr. Sinister, a nearly immortal geneticist obsessed with mutant DNA, particularly that of Scott Summers. He has been manipulating Scott since he was a kid in an orphanage run by Sinister (under the guise of Dr. Nathan Milbury). Sinister believed that any child Scott and Jean would have would possess incredible powers (much later we learned he planned to use the boy’s power against his master, Apocalypse!)

Scott and Madelyne were semi-happily married; Scott retired from the X-Men and they moved to Alaska with their infant son, Nathan Christopher. When Jean Grey was discovered alive and well, Scott abandoned his family to be with her in what has to be the biggest dick move he’s ever pulled (it drove writers Chris Claremont and Louise Simonson, who didn’t write those issues, insane trying to massage him back to where he should be, but I digress). While Scott was off having adventures with Jean and their friends Beast, Iceman, and Angel (the original X-Men) as X-Factor, his house was blown up, and he was told his wife and son were inside. He had since come to learn that Nathan was still alive, and he has been searching for him since. 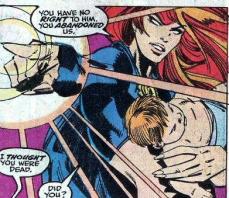 Madelyne is confronted by Sinister, and told of her origins. She is also approached by demons from Limbo, who say that if she sacrifices her son she can bring Limbo to Earth and rule with an iron fist. Driven mad by the knowledge of her origins, and by the knowledge that Scott only loved her because she was created specifically for him to fall in love with, she agrees. Her encounter with Sinister awoke her mutant abilities (Jean’s mutant abilities), and she agrees that with the demons she will kill Scott and sacrifice her son. 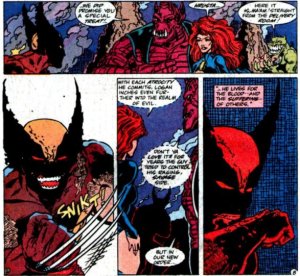 Limbo begins to merge with Earth, and everything goes bananas. Buildings come to life and start killing inhabitants, subway cars become runaway subterranean metal death worms, mailboxes eat people… in short, it’s madness. The X-Men are fighting the Marauders, Sinister’s enforcers and those responsible for the Mutant Massacre. During the fight the X-Men begin to transform to fit their surroundings. They begin to look almost demonic, and their worst personality traits come rushing to the surface. Dazzler only cares about being in the spotlight, Longshot just wants attention, Wolverine wants to kill everything, etc.

Eventually X-Factor learns what is happening with Madelyne, the demons, and Scott’s son, and they rush to intervene. Unfortunately, the demonic X-Men stand in their way, and the two teams fight it out a bit. Eventually the teams are able to join forces and fight the demons while Jean and Madelyne fight. Jean wins, and as Madelyne is dying Jean absorbs her memories, which messes up her head for a while (she can remember being married to Scott and having a son with him, but it wasn’t really her). The two teams learn that the man responsible for everyone’s misery is Mr. Sinister, and they go to confront him.

While all of this has been happening, over in New Mutants, the kids are able to save Illyana from Limbo and are eventually even able to shut down the portal that’s causing the merging of Limbo and Earth, and all the demons are sucked back to Limbo. Thanks to quick thinking on the kids’ parts, and some help from Colossus, the kids are as responsible for saving the day as the adults are.

Sinister is incredibly powerful, and is able to defeat both teams, along with the help of Malice, his Marauder currently possessing Lorna Dane aka Polaris, the X-Man daughter of Magneto (with the same magnetic powers). For some reason, he binds Cyclops instead of trying to kill him, and taunts him by kissing the unconscious form of Jean Grey.

They X-Men, linked telepathically by Psylocke, figure there’s  a reason Sinister never engaged Cyclops in battle, and focus their energies on distracting Sinister long enough to free Cyclops. While the X-Men attack Sinister, Beast gets Jean Grey clear, and Havok (Alex Summers, Cyclops’ little brother) goes to free Cyclops. Scott is broken emotionally; the woman he loved, married, and abandoned is dead, and he is reeling from that, not to mention all of the repressed memories that finally meeting Sinister again has brought rushing to the surface. He is demoralized. Havok taunts him while he hits Scott with his energy blasts, saying it’s Scott’s fault that Madelyne’s dead, and that he never loved her, etc.

Alex is trying to piss Scott off enough for him to really fight like he means it, and shooting him with his energy blasts because they make Scott stronger. For whatever reason, a lot of mutant siblings are immune to the others’ powers. With Cyclops and Havok, not only do their incredibly destructive powers not hurt each other, they actually kind of supercharge them, almost like hitting the nitrus oxide button in a race car. With everyone clear of Sinister, Cyclops lets him have it with a full power optic blast, incinerating him.

Unbeknownst to the X-Men, Sinister has had many bodies destroyed in the past, and has a mechanism in place to clone a new body and download his consciousness into it at the pico-second of death, so they’re not done with him. But for now, the two teams part with the knowledge that even though they’ve been through hell, almost literally, they were able to win in the end. Cyclops is reunited with his son, which the poor guy deserved after the last two or three years they had put him through.

There were ramifications in all three titles from Inferno. In Uncanny X-Men, Longshot felt tainted by his demonic possession, and leaves the team to find inner balance. He would be gone for quite a while. Seeing Sinister killed loosened Malice’s hold on Polaris, who was soon able to contact Havok (her boyfriend) and the X-Men for help.

Over in New Mutants, Illyana’s experiences in Limbo have reverted her physically to her childhood age; the same age she was when she was taken into Limbo the first time. She is returned to her parents in Russia. During the madness with the demons, the Hellfire Club made a deal with them for protecting (well, Sebastian Shaw did). At this point in time Magneto was not only the acting headmaster of the Xavier institute, but was a member of the Hellfire Club, as well. The kids witness the deal being made, and after the Inferno is over they part ways with Magneto. Some members of a group of mutants that X-Factor had helped when they were ‘mutant hunters’, the X-Terminators, helped the New Mutants during the Inferno. Some of them join the team afterwards (Rictor, Skids, Boom-Boom, Rusty).

Finally, in X-Factor, Angel officially changes his codename to Archangel, Cyclops catches up on lost time with his son, and Jean struggles with Madelyne’s added memories, as well of those from her time as Phoenix, for a good while.

While far from the best X-Men event, Inferno was pretty cool. The idea is so strange, and not at all what you would expect from an X-Men story (demons?), but I think that’s why it works.