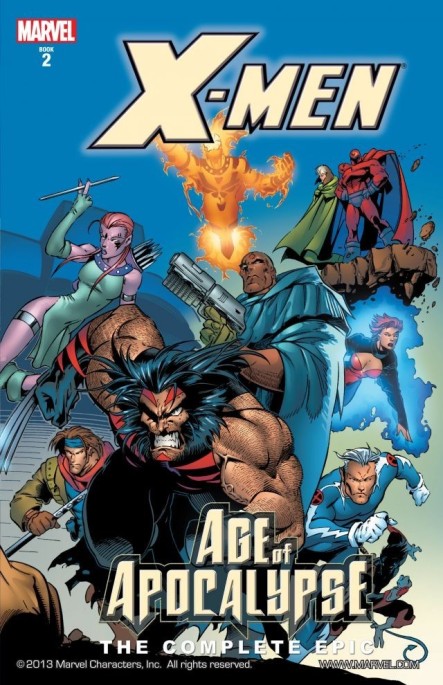 We’ve covered the awesome X-Men event that is Age of Apocalypse more than a few times, most notably here and here, and on the podcast here. Top to bottom one of the coolest events in Marvel’s history, it’s nearly impossible to select just a few moments from the list. Each of the titles had something going for them, and all had at least a handful of fanboy moments, awesome action, great character moments, or just something you’d never seen before in an X book.

The story opens with the time displaced X-Man, Bishop (the one man that remembers the true timeline) being assaulted by Unus the Untouchable and some of Apocalypse’s foot soldiers. He is rescued by the X-Men, led by none other than Magneto, and featuring characters that had never been X-Men or characters that we had never seen before (or at least very little of) like Blink, Morph, and Wild Child. Some say Morph is the AoA version of the Changeling, but I bet it’s much more likely he is the comic version of the character from the 90’s Fox kids animated series which had the catchy theme song that is now stuck in your head.

As we quickly get to know the team through the Alpha issue and the first issues of their respective titles, we see that even the characters we know and love, like Iceman, Rogue, Nightcrawler, and Sunfire, just to name a few, are very different characters in this world. They have had to make moral comprise after compromise in their war with Apocalypse, and have had to push their powers to their absolute limits, and as such in many ways are fundamentally different. The AoA Nightcrawler bears very little resemblance (other than physically, naturally) to the Kurt Wagner we know and love.

This not only gives the stories a real sense of newness, but it also gives the impression that in this world, anything can happen, which is good, because it helps prepare readers for a whole bunch of shenanigans and goings on.

A quote Professor X and some of his closest students use to use a lot when written by the likes of Chris Claremont and Scott Lobdell is “The more things change, the more they stay the same”. Well, in this particular instance, you can toss that crap right out the window.

The X-Men are dead; long live the X-Men.

One title that is often overlooked in the Age of Apocalypse story (and it’s easy to understand why, this thing is massive) is the two issue X-Men Chronicles. The second issue is fairly forgettable, but the first issue is a nice look into the formation of this version of the X-Men and their first mission.

Rather than Professor X’s X-men stopping Magneto from messing with nuclear warheads at a military base, here we see Magneto’s X-men fighting to stop Apocalypse from doing the same thing. We meet his early Horsemen (none of which are still around when the main story begins) who mostly aren’t worth mentioning, except for Sabretooth, who loses a one on one fight with Weapon X (our Wolverine), who severs Sabretooth’s spine and leaves him for dead. Apocalypse, who believes in the strong surviving over all else, also leaves the fallen Horseman for dead. The next time we see Sabretooth, he has been a member of the X-Men for some time.

We see that Weapon X’s association with the X-Men probably isn’t meant to last long. He has no ‘need’ for Magneto’s training, and once he and Jean Grey bond she is able to provide him the telepathic ‘treatment’ he needs to keep from going all tiny Canadian psycho on everyone all the time, and we see the seeds set for the Weapon X title and the doomed relationship between the two.

In the main story, Magneto’s son, Quicksilver, is an X-Men team leader and second in command only to his father. However, Magneto’s daughter Wanda, the Scarlet Witch, is conspicuously absent. We see why in this issue. Apocalypse’s son, Nemesis, finds the location of Magneto’s training center for the young mutants in his care (including Magneto’s future wife, the newly joined Rogue!) and uses the opportunity presented to him with the X-Men’s absence to attack (to leave a message to Magneto).

Both Rogue and Wanda fight, but sadly Wanda does not survive the battle. Nemesis is gravely injured, forcing him into a containment suit, which is when he becomes the monstrous Holocaust. By the end of the issue many of the key pieces are in place, and the conflict between Magneto and Apocalypse’s forces is well established. It’s war. 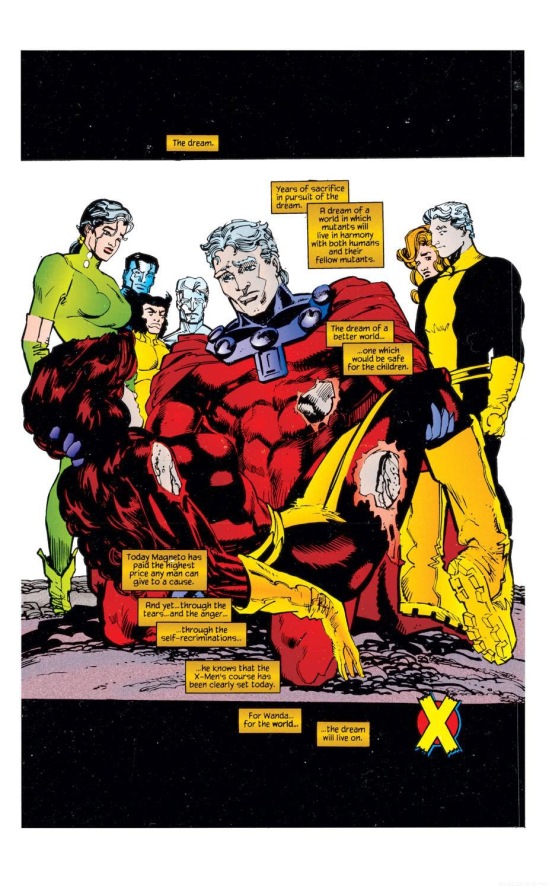 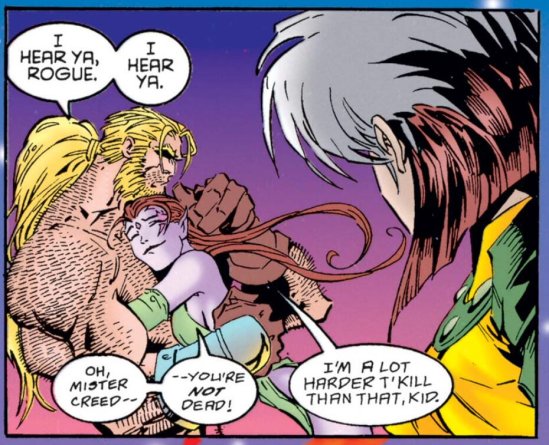 One of the interesting twists that the Age of Apocalypse features is Victor Creed, aka Sabretooth, as a honest to goodness good guy. He’s not coerced into joining the X-Men, he is doing what he believes is right. His turn really starts when he saves the young Blink, and over time the two establish a bit of a father-daughter type relationship (think Wolverine-Jubilee).

This version of Sabretooth, like ours, has a screwed up past full of bad decisions, but in this case he’s actually trying to make up for those decisions. When he and Wild Child discover the location of Holocaust’s factory where they create foot soldiers from the broken down DNA of resisters- human and mutant alike- he sends Wild Child back to the X-Men to let them know what they found, and faces off one on one with Holocaust, which, even for a guy with accelerated healing, is practically a death sentence.

Creed does something our version has never, and likely will never do, and that’s put someone else’s needs before his own, and fight for something greater than himself.

It’s really strange to say, since the version we know and love to hate is such a horrible, horrible bastard, but this Victor Creed is an honest to God hero. The same version (or one close enough to it) would be prominently featured (along with Blink) in the super underrated series Exiles.

The newest X-Men book on the stands at the time, Generation X seemingly suffered at the hands of the Marvel scheduling gods. Their book had just launched, and only released a couple of issues, before it was ‘cancelled’ and replaced by the Age of Apocalypse ‘Generation Next’.

This could have been a disaster for the book, even though it was the mid-90’s and there was an ‘X’ in the title. Instead, writer Scott Lobdell and artist Chris Bachalo turn in probably the most memorable, twisted, horribly screwed up story in the entire crossover.

Colossus and Shadowcat (a much more militant version than the couple from our world) are in charge of training the next generation of X-Men for Magneto. When they learn Colossus’ sister, Illyana (aka Magik) is still alive and in the Sugar Man’s slave pens, the team comes up with a plan to save her. They kind of have to, it’s what Magneto needs from them for his plan to fix reality (it’s a whole thing).

Naturally things go straight to hell, and it’s kill or be killed. Colossus gets Illyana out and gives her to his wife (Kitty) to take her away, and goes back for the students they left behind.

Unfortunately, he arrives after they have been overrun, and chooses to leave them behind to die so he can be with his sister rather than surely dying beside them. His students see him close the door on them before they are lost. Colossus lives, but is broken.

The next generation of X-Men is dead.

Splitting Up is Always Hard 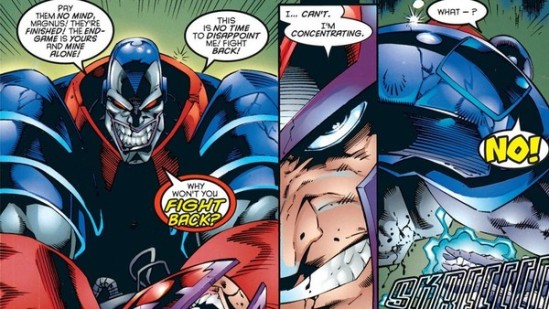 At the end times, the Eurasian Human High Counsel has unleashed their nuclear bombardment of Apocalypse’s North America with their army of Sentinels. Magneto’s X-Men make a desperate attempt to save him from Apocalypse’s clutches and to reach the M’Kraan crystal (to fix reality) while waging war against the bulk of his forces. Mutants are dying right and left, it’s chaos.

The mutant Nate Grey, aka X-Man (the genetically engineered son of Cyclops and Jean Grey- it’s young Cable, essentially) finds the two mutant leaders and attacks Apocalypse before he is sidetracked battling Holocaust. This leaves Magneto one on one with the massive, ancient mutant, and things don’t appear to be going well. In fact, Magneto appears to be getting his ass handed to him, badly.

Magneto has spent the entire fight focusing his power, sacrificing his body to buy himself time. In one massive, disgusting, totally metal (no pun intended) display of force, Magneto tears Apocalypse right in half!!!

While this is certainly super badass on its own, the context really makes it even more awesome. Like when Cyclops blasted Sinister in Inferno, this was the first time we had ever seen Apocalypse really, truly killed. Sure, there was the moment in X-Factor issue 68 where Cyclops unleashes a giant ‘screw you’ optic blast that seems to kill the big A, but it was a death like the Joker’s many, many deaths: there was a number of ways he could easily have survived.

Not so much in this case. He’s dead as hell.

No coming back from that, strongest or no. “Tell me AGAIN, Apocalypse… just how STRONG you are.”