“Just a matter of time, I suppose.” – The Comedian

As faithful an adaptation as we were ever going to get, despite the fact that this movie probably never should have been made. The whole purpose of the story was to use comics to deconstruct comic book archetypes. It was never intended to be a movie. For years Terry Gilliam was attached to a possible adaptation, but eventually quit the project, supposedly saying it was an ‘unfilmable movie’. Surprisingly, Zack Snyder did a great job while remaining faithful to the source material (possibly even too faithful at times). 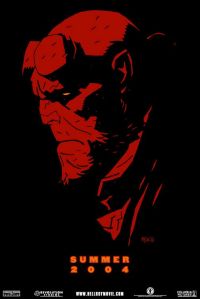 “You’ve been burned by some kind of organic acid.”- Abe Sapien

Ron Perlman IS Hellboy. The most perfect piece of casting since… shit, maybe ever. If you could design a human being to play Hellboy, you’d end up with Perlman. The movie is too by-the-numbers at times, and really ambitious at others. The monster designs are great, and the departures from the comic story are all forgivable, with the exception of the Liz-Hellboy romance. That’s a bit of a head scratcher; it reeks of some studio exec or random executive producer going ‘the audiences will want him to get the girl!’

13. Scott Pilgrim Vs The World

“I’m in lesbians with you.”- Scott Pilgrim

My favorite director doing a movie version of a comic book inspired by video games? I’m sold. This movie is 80 pounds of awesomesauce in a two-pound bag. Even the it-seemed-questionable casting of Michael Cera as Scott Pilgrim ended up working really well. Chris Evans and Jason Schwartzman are both terrific in small roles (really, other than Scott, Knives, and Ramona, every role in this movie is a small one), and even Brandon Routh doesn’t suck. The soundtrack by Beck is good, too.

The only of the Sam Raimi Spider-Man movies to make my list. The first one had a terrible Green Goblin and the third one is extremely flawed. But this one is really good. Doc Ock rules. The action is great, especially the fight between Spider-Man and Dr. Octopus on the train. The 2.5 version has an even longer fight on the train, and it is fantastic. The only complaints I have are the ‘losing my powers’ subplot and the scene at the very end of Mary Jane leaving John Jameson at the altar and running down the street all goofy and slo-mo. But the ending before that, with Harry Osborn discovering his fathers’ Green Goblin lair…. sweet.

“Don’t make me…hungry. You wouldn’t like me when I’m hungry.” (In broken Portuguese) – Bruce Banner

While eclipsed entirely by the Hulk portrayed in the Avengers, this Hulk is still cool. General Ross is played well by William Hurt, Betty Ross is played well by Liv Tyler (even though the Betty Ross in the previous, inferior Hulk movie was the much hotter Jennifer Connelly). The villain is awesome- the Abomination, the only villain stronger than the Hulk- played by Tim Roth in an odd bit of casting. Ed Norton is really good as Bruce Banner and the Hulk looks the best he’d ever looked up to this point. Also, the Iron Man cameo is great. 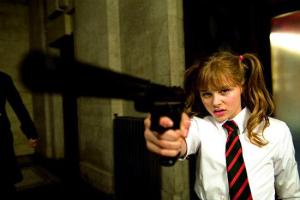 “Like every serial killer already knew: eventually fantasizing just doesn’t do it for you anymore.”- Dave Lizewski

The only real example on this list where the movie version is actually superior to the comic book. While the book is good, the movie is REALLY good. This is one of only two or three movies that I feel like Nic Cage actually acts in. His Big Daddy is very likeable. The main characters are all great, especially Hit Girl, who entirely stole the show (no surprise to readers of the book), and the violence is crazy. Great job. 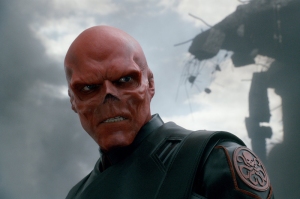 “Yeah. I knocked out Adolph Hitler over 200 times.”- Captain America

Of all the Marvel Avengers movies, this could have easily been the biggest disaster. Everyone was skeptical of the casting of Chris Evans as Captain America, as well as the choice of director (Jurassic Park 3’s Joe Johnston). The only thing we really knew going in was that it was likely Hugo Weaving would be awesome as the Red Skull. Well, thankfully, other than a few small missteps, this movie was great. It has a very self aware sense of humor, and some great action scenes. The entire movie is essentially prologue, and that’s probably the biggest weakness it has. The sequel should be very interesting. 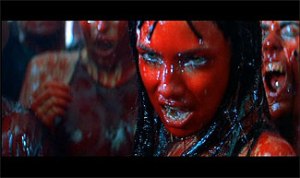 “Some motherfuckers are always trying to ice skate uphill.”- Blade

The movie that kicked off the comic craze of the last decade and change. Wesley Snipes was awesome as Blade. I take back what I said earlier. Blade is also superior to the comic book version, as evidenced by the fact that Marvel can’t seem to figure out what the hell to do with him. Snipes’ Blade is a complete and total badass, and has a terrific entrance: at the end of the really creative vampire blood rave he comes in and slaughters the hell out of a ton of vampires. The sequels aren’t great, but the first Blade is awesome.

“Do you want me to take him down or would you rather send in more guys for him to beat up?”- Hawkeye

I knew that if they could pull off Thor there was a good chance that Avengers was going to be good. This easily could have been ridiculous, but it was terrific. While the action/adventure aspect is fantastic, it’s the humor that steals the show. Thor walking into a pet store and proclaiming “I NEED A HORSE!” is a personal favorite scene of mine. Also, the entire cast is excellent, from Tom Hiddleston’s Loki to Chris Hemsworth’s Thor to Anthony Hopkins’ Odin to Natalie Portman’s Jane Foster and her crew. Also of note is a small but pretty cool Hawkeye cameo. 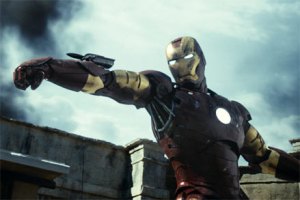 “Give me a scotch. I’m starving.”- Tony Stark

Pretty much a perfect portrayal of both Tony Stark and Iron Man, everyone involved with this movie take a bow. Thanks to the success of Iron Man we got the Incredible Hulk, Thor, Captain America, Avengers, Iron Man 2, and all of the other sequels coming up. Hell yeah. Robert Downey Jr is incredibly well cast as Tony Stark, and having capable actors like Gwyneth Paltrow and Jeff Bridges was a smart move. The special effects and design departments did great work; Iron Man looks amazing. The ending to this movie is maybe my favorite ending to a super hero movie ever, too.

“I’m going to throw you out the window now.”- Spider-Man

Ohhhh yeah. As a huge nerd for Spider-Man, this one pushed all the right buttons for me. The acting, casting, action, humor… it was all right. The Lizard was cool, although I would have gone with a different design on his face. Spider-Man’s movements were great; he really had spider-like movement at times, particularly when he was crawling around the Lizard and spinning him up with webs. The relationship between Peter and Gwen was near perfect, and I loved the twist on the “I can’t be close to anyone because I’m Spider-Man” ending. Great job all around. I can’t wait to see what they do next. 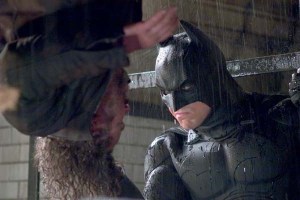 “You look like a guy that takes himself too seriously. You want my advice? You need to lighten up.”- Scarecrow

Oh, Chris Nolan, I love you so. What a great job. The portrayal of every character was spot-on, from Batman/Bruce to Ra’s Al Ghul to the Scarecrow to Alfred, everyone was perfect. The story was terrific; a near perfect mix of stories from the comics. The choice of villains was exactly right, and the portrayal of Scarecrow was downright perfect. Good on Cillian Murphy. Ra’s Al Ghul was a bit different from how he is in the books; actually a lot different, but the core of the character was there, and he was more than close enough to the comic book character for him to be immediately recognizable. There was just no way they were ever going to top this one, let alone top it twice. 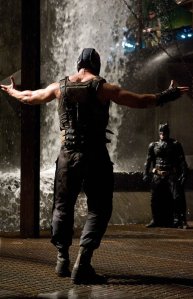 Somehow they managed to pull off a movie that features a retired Batman, a replacement Batman, Batman getting his ass beat, a Catwoman that isn’t really Catwoman but kind of is, and no Joker. All of this is against it, but the fact of the matter is that this movie is really bad ass. Tom Hardy’s Bane is fantastic, the story continues with the themes and plot threads from the previous two films, and it has a ton of action. A very strong ending to the best series of super hero movies ever made. Even if I’m not overly thrilled with the ending, it absolutely makes sense and fits within the story the films told.

“Don’t talk like one of them. You’re not! Even if you’d like to be. To them, you’re just a freak, like me! They need you right now, but when they don’t, they’ll cast you out, like a leper! You see, their morals, their code, it’s a bad joke. Dropped at the first sign of trouble. They’re only as good as the world allows them to be. I’ll show you. When the chips are down, these… these civilized people, they’ll eat each other. See, I’m not a monster. I’m just ahead of the curve.”- Joker

While Batman Begins gave us two awesome villains, then Dark Knight gave us one in Two-Face and a transcendent villain in Heath Ledger’s Joker. The guy won an Oscar, for God’s sake! My favorite thing about this one is that the Joker kind of wins. Sure, the mob is finished in Gotham after this, but Joker didn’t care. He found a new playmate in Batman, and utterly destroyed Harvey Dent, as well as Batman’s standing with the people of Gotham. He fucked shit up so much that Batman fucking RETIRED FOR 8 YEARS!!! 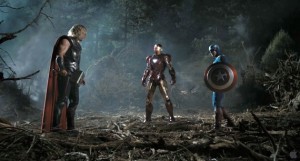 “You really have got a lid on it, haven’t you? What’s your secret? Mellow jazz? Bongo drums? Huge bag of weed?”- Tony Stark (to Bruce Banner)

The closest thing to the comics committed to film. No other movie has ever so perfectly captured the feel of an epic Avengers adventure. The action was mind-blowing, and they somehow found a way to give everyone multiple moments to show off. Of course, as great as everyone was, and as incredible as it was to see all of those characters on the big screen together, the Hulk stole the whole show. Fans of Joss Whedon knew he was going to do a great job, and he did way more than that. He absolutely destroyed in both the screenwriting department and the direction. With Joss and the entire cast back for at least 2 more movies, the future of the franchise looks really bright. Also, seeing you-know-who in the mid-credits scene…