Part of making a good comic book movie is getting the hero correct. You have to make sure they look close enough to the source material, and you really have to make sure the character feels right. You can’t have Daredevil fighting on a seesaw, or Batman and Robin going to a social event with the media present and talking to reporters (I hate you, Schumacher).

But, just as importantly as all of that is getting the villain right. How many lame ass versions of cool characters have ruined (or at least contributing to the ruining of) movies? I’m looking at you, Jim Carrey’s Riddler, Danny Devito’s Penguin, Tommy Lee Jones’ Two-Face, Arnold’s Mr. Freeze, Uma Thurman’s Poison Ivy, Collin Farrell’s Bullseye, Jigsaw in Punisher War Zone, and every villain in every Superman movie (yes, even Terrance Stamp’s Zod).

Here are my top 10 examples of villains they got right.

10. The Abomination (The Incredible Hulk)

This really shouldn’t have worked. They completely changed everything about the character except for his name, Emil Blonsky. He looks different, acts different, has a completely different origin, and somewhat different motivations. The only real similarities besides his name are the fact that he’s as strong as, or stronger than, the Hulk, he’s huge, and he’s a maniac who has no qualms whatsoever about massacring anyone and everyone that gets anywhere near him.

I like the fact that we saw Blonsky evolve from a regular man to a psuedo super soldier to a gamma monster. I like the design, despite the fact that he’s completely different from the version that’s been around for nearly 50 years. I like that he’s made with a combination of super soldier serum and Hulk blood, which is the worst nightmare of the Hulk, and something that would/will piss off Captain America to no end.

I think the fight(s) between Blonsky/Abomination and the Hulk are the highlights of this movie, and probably keep it from being a really average movie.

END_OF_DOCUMENT_TOKEN_TO_BE_REPLACED

“Just a matter of time, I suppose.” – The Comedian

As faithful an adaptation as we were ever going to get, despite the fact that this movie probably never should have been made. The whole purpose of the story was to use comics to deconstruct comic book archetypes. It was never intended to be a movie. For years Terry Gilliam was attached to a possible adaptation, but eventually quit the project, supposedly saying it was an ‘unfilmable movie’. Surprisingly, Zack Snyder did a great job while remaining faithful to the source material (possibly even too faithful at times).

END_OF_DOCUMENT_TOKEN_TO_BE_REPLACED

Continued from Part 1: The Golden Age!

This period from around 1956 to 1970 was a huge shift in the world of comic books. Prior to this comics were in decline, mainly because of the Comics Code Authority banning all the awesome shit that was actually selling, because they were afraid it was going to create a generation of delinquents, you know like rap music and video games! Thanks to douchebag of the century, Fredric Wertham, many comic books and pulp magazines were burned in massive bonfires around the country. 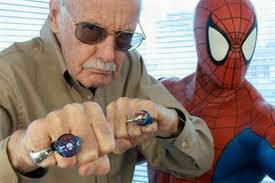 So the Silver Age is considered the point at which comics were rejuvenated after a lame stint of pure camp in the Atomic Age of the 50’s. It was the beginning of many a Marvel hero and was marked by a much more sci-fi focus than ever before. This was also notably the introduction of some of the industry’s best talent to date, both artists and writers, including Neal Adams, Denny O Neal, Jack Kirby, Steve Ditko, John Romita Sr., and of course Stan Lee. Comics of this era are seen as an extension of the Atomic Age, and are often heavily influenced by B-rated Science Fiction films of the time where flying saucers, and giant radioactive monsters ran amok across the silver screen. One of the earliest instances of this was with the devious BRAINIAC first invading Action Comics in issue 242 (1958). Much like the Children of the Atom (the X-Men), Comics began to evolve.