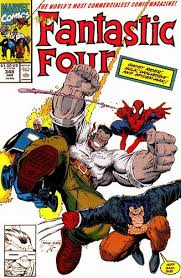 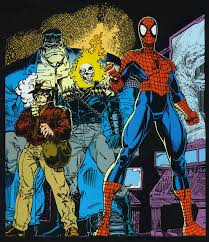 She convinces this unexpected group to go searching for this weapon she needs, telling them that by finding it they will find the FF’s killer.

These guys are all from very different walks of life, even for superheroes, and none of them get along that well. But they all either liked or respected the FF (and Ghost Rider just wants VENGEANCE! as he always does) and agree to help out.

Using a fantasticar and a tracking device, they travel around looking for the signal for this weapon, and are confronted with giant monsters going berserk all over the place.

The monsters resemble the creatures found in the Mole Man’s kingdom, so they force their way into his subterranean lair. While there they realize they’ve been played, and played by a pro. The Skrull that was posing as Susan Richards actually possesses a low-level telepathy, and uses it to influence others around her. She has even convinced Reed Richards that she is the real Sue! 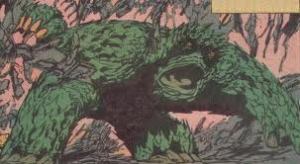 Surrounded by the Mole Man, his army of moloids, and a bunch of his giant beasts, things don’t look so great, Hulk or no Hulk. Thankfully this is when the REAL FF make their triumphant return, and we are reminded that even though there are only four of them, and their stories take place in a world with Avengers and X-Men, the FF are a real force to be reckoned with and are second to none.

Thanks to some teamwork from the two groups, and some quick thinking by Spidey and Reed Richards, the day is saved and the ‘weapon’ has a new home amongst the giant monsters that live under our streets (comforting)…

The “weapon” our heroes were looking for. Doesn’t look like much, but he’s a total bad ass

The Punisher shows up at the very end in his helicopter (complete with Punisher skull logo on the side) and, in maybe the best cameo ever, basically goes “Oh, they got this already” and flies away.

The story is simple enough, and nothing really worth noting, but the art isn’t. Arthur Adams is a damn genius, and he gets to draw his favorite characters and his favorite monsters here, and he does not disappoint for one single panel. Great, great stuff. 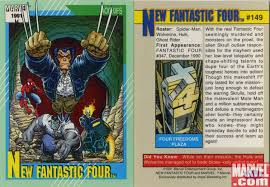 While the story was very short, and didn’t really do much as far as lasting consequences, it was very popular. The new team even had a card made for the 1991 Marvel Trading Cards series, and if you put these 4 characters together in Marvel Ultimate Alliance you get a “New Fantastic Four” power upgrade. There have been a bunch of what-ifs and even more appearances by this group in the years since, and even a sequel of sorts a little while back starring the Flash Thompson Venom, the Red Hulk, the female Ghost Rider, and X-23 trying to stop Mephisto’s son Blackheart from taking over Las Vegas, which was awesome.