This was a pretty brutal end to a fight between the Punisher and Wolverine in Marvel’s Punisher Max series, where Castle literally ran Logan over with a steamroller before shooting his nuts off with a sawed off shotgun! Damn!

So remember how the Punisher got attacked by a bunch of guys in prison, and had his face cut up by Jigsaw? And remember how he escaped from prison and found an off-the-books doctor to fix his face, but asked that they change his appearance so that he could remain under the radar?

And remember that the doctor decided the best bet was to somehow make him a black man?

Yeah, the doctor performs an experimental surgery that somehow changes his skin color and facial structure so he looks like an African American. He teams up with Luke Cage, who has no idea he’s the Punisher, and they beat the bad guys. Then Frank goes back to being white. 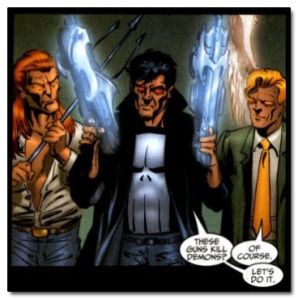 There was a time at the turn of the century when Marvel just didn’t know what to do with the Punisher.

The most straight forward, uncomplicated character they have, and they couldn’t figure it out. So what did they do? They killed him, had angels resurrect him with demon sight (he could see demons) and sprit guns that could kill said demons.

END_OF_DOCUMENT_TOKEN_TO_BE_REPLACED

We all wish this was photoshop…