The age old questions of comic fans: Batman or Superman? Spider-Man or Wolverine? The debates about the best heroes are endless. We tried to make a top 10 list, but that was just too hard. So we tried a top 25, but that quickly became a top 50… you get the idea. So we were able to ‘narrow’ it down to an even 100. Odds are you will vehemently disagree with who did or did not make the list, or just the order that we placed them. But, hey, it’s our list.

(Honorable mentions to Beta Ray Bill, USAgent, Martian Manhunter, Kid Flash, Hercules, The Frenchman and the Female (the Boys), Abe Sapien, Spider-Man 2099, Static Shock, Nite Owl, Guy Gardner, Booster Gold, Spawn, Atom Eve, Mary Marvel, and a hell of a lot more. So many more we could- and may- do another whole 100 list!)

We will release these in installments of 10 so that you don’t have the longest list ever to read through. Agree with the placement or who made the list? Disagree with the burning power of a thousand suns? Let us know! Enjoy!

If you go by just his impact in comics, Blade probably shouldn’t make the list. He was a big figure in the excellent Tomb of Dracula comics in the 70’s and was part of the “Midnight Sons” line in the early 90’s that did well, but other than that for the most part he’s been a bit player, at best. But Blade is also a household name thanks to three movies and a short-lived TV show. While Marvel hasn’t always known what they want to do with him, leading to numerous (and all pretty dang different) mini-series and short-lived ongoing series over the years, they have done a good job of keeping him just to the left of the spotlight. He was a member of the MI:13 in the insanely, criminally underrated “Captain Britain and MI:13”, he helped the X-Men fight an army of vampires in the “Curse of the Mutants” story, and occasionally pops up in the odd issue of Spider-Man or wherever. Recently he became the newest member of the Avengers. 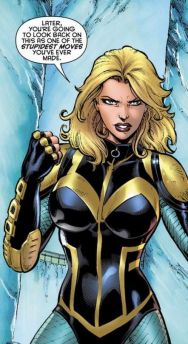 “Some of us do have to work, Oliver. I mean, we don’t all have closets full of money.” ~ Black Canary

Man, talk about someone that’s not to be messed with. Black Canary is one of the most formidable hand-to-hand fighters in the DCU, on par with the Bat family. Add in her sonic scream, intelligence, and coolness under pressure and you’ve got one badass mofo on your hands.

A longtime member of both the JSA and JLA as well as the Birds of Prey, she’s got ties all over the place, particularly with Wildcat, Dr. Midnight, and of course, Green Arrow. With the company she keeps it would be very easy for her to be the forgotten player, or the person that makes you go “what’s she doing here?”. But on a team with people like Superman, Batman, Wonder Woman and Flash and she was elected the team leader and field commander. Bad. Ass.

One of the greatest things Dan Abnett and Andy Lanning did in the first decade of the new millennium was revamp the Guardians of the Galaxy concept into a ragtag team of losers in the excellent Annihilation: Conquest. One of those was a giant talking tree named Groot who didn’t get along very well with Rocket Raccoon. Throughout the story and into the ongoing title Groot, Rocket and the rest went from a bunch of castoffs to big time Marvel heroes. One of the biggest stars of this new status for the team was our resident talking walking stick. After Conquest, in which he could speak full sentences, he is left as a sapling under Rocket’s care, which is where the ‘only says one thing’ thing started, and the character really took off.

Groot is silly as hell on the surface but is actually a pretty deep character, emotionally. He’s very powerful and fiercely loyal to his friends and allies.

Of course all of the Guardians characters owe a huge, huge, HUGE debt to James Gunn and the respective actors who portrayed them on the big screen.

“I mean, I can’t miss… I’m on a team with super–humans. And one god, in case you’ve forgotten. Even you… well, you climb walls really well. The training is the only thing that makes me special. And if I’m not special, then none of this is worth it. I gave up a lot for this life. I could have been happy with Mockingbir– Bobbi. We could have had a good, simple life. But I wanted to play with the big boys. And if I miss, it means I’m just another dude with a bow. It means I’ve been fooling myself this whole time. And that’s why I never miss.”   ~ Hawkeye

If ever there’s a ‘what’s he doing here’ character, it’s gotta be Hawkeye. The guy with the bow and arrows seems like he’d be cannon fodder on the first mission. But old Clint Barton is far from just a guy with an outdated weapon. If he wanted to be, he would be just as lethal and dangerous as Bullseye. But Hawkeye is a good person at heart (even if he started out as an Iron Man villain) and doesn’t want to kill people. So he aims his arrows very carefully. It would be easier if he just tried to kill everyone, but he’s shooting arrows into non-lethal areas of his opponents’ bodies. Often while running for his life or dodging who-knows-what. That takes some ridiculous fucking skill.

One of the longest tenured Avengers, he’s been front and center for some of the most important, dangerous, insane events in Marvel history. He’s led both the Avengers and the Thunderbolts, both with rosters full of people that could seemingly eat him for breakfast, but he’s still going strong. And like Namor, Batman, Wolverine, or any number of other characters, he has really interesting relationships with pretty much everyone, which makes for a lot of compelling story moments for him.

“Still, anyone who looks like I do has to find his fun when he can.” ~Beast

X-Man, mutant, super genius, and part-time Avenger, Hank McCoy is in fact one of the original five founding members of Professor Xavier’s X-Men (along with Cyclops, Marvel Girl, Angel and Ice Man). His physical prowess isn’t just matched by his intellect, its surpassed! Originally Hank’s initial mutation was just that he had really freakishly big feet (well that and ape-like proportions and strength), but later on he had a number of secondary mutations, most notably his more recognizable furry blue form (all because his dumb ass drank a random experimental formula that made him go all grey and furry, which was eventually changed to blue for some reason). After the fallout of AvX, Beast attempted to bring the younger versions of the original five X-Men from the past to the present in order to set things right, but in doing so created a convoluted time paradox that created 5 alternate / younger versions of themselves just to confuse comic readers. The alternate version of himself never became blue and instead of pouring his genius-level intelligence into science instead became a master of the mystic arts.

“John Henry fought the machine and won. What I’m fightin’ is a deadlier kind of machine — one I helped put in motion. One I’m gonna stop — even if it kills me.” ~ Steel

A construction worker whose life was saved by Superman during his fight with Doomsday, Steel dedicated himself to living up to the example Superman set for everyone. When he died, John donned a suit with his symbol and cape to show who he was representing, what he was fighting for. At first glance probably the weakest of the four replacements that were around during the Reign of the Supermen, John Henry Irons has nevertheless outlasted them all (Superboy died and got rebooted a few times and the Cyborg Superman appears periodically as a villain, the Eradicator pretty much disappeared). Focusing more on the ‘man’ in ‘Superman’, John is self-made. He doesn’t have crazy super powers, he isn’t from another planet, and he isn’t fabulously rich. He is, however, very, very smart and very good with his hands. He built the Steel suit and has been a stalwart of the DC Universe ever since. 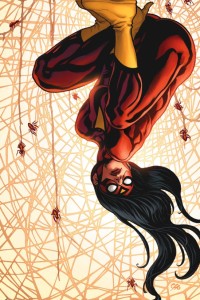 “Congratulations, Wolverine. You are no longer the most screwed–over human in the history of the entire world.” ~ Spider–Woman

Holy complicated backstories! Jessica’s parents were members of Hydra, her father experimented on her and gave her spider powers, she betrayed Hydra and joined Shield, has been a double agent for both sides, lost her powers, had her powers restored, been replaced by a Skrull and had her face be the face of an alien invasion… damn.

Jessica has powers similar to Peter Parker’s, in that she is strong and can stick to walls, but unlike him she doesn’t have a spider-sense, but can kind of glide/fly, can fire ‘venom blasts’ from her fingers, and can emit a pheromone that attracts people to her and allows her more easily manipulate them.

An expert spy, private detective, superhero, and now mom, plus one of the all-time great costumes (even the updated one is sweet), Spider-Woman is one of the greats. 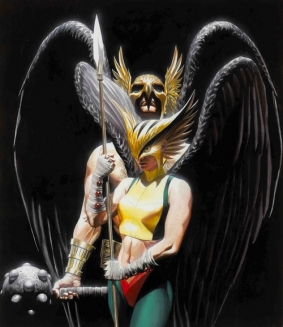 “I hope it was worth it, Batman. Because I’m about to give you ten minutes you’ll never forget.” ~ Hawkman

I put them as a tie because, to me at least, they are so tied to one another. Sure, there are plenty of stories with one without the other, but they are so much cooler together. Their (insanely complicated) history of love, death, and rebirth is one of the most interesting in all of comics, they have insanely cool visuals, and are both top level fighters and capable leaders. Both have led the JLA or JSA at one point or another.

Seriously, they’re so cool. I defy you to read Geoff Johns’ ‘Hawkman’ or ‘JSA’ and not come away loving them (or at least Hawkman). Same goes for Brad Meltzer’s ‘Justice League of America’ or the crazy awesome Justice League/Justice League Unlimited animated series (or at least for Hawkgirl).

“This city’s afraid of me. I’ve seen its true face.” ~ Rorschach

Perhaps the most iconic character from Alan Moore’s ‘Watchmen’, Rorschach (named after the ink blot test) isn’t just the narrator of the story, he’s the audiences POV – which, when you think about it is kind of insane… because he’s totally bat shit crazy and yet, at the end of the story, he’s really the only character making any sense. Don’t get me wrong, he’s still a total badass. He might be a bit off, but he’s the one character that doesn’t compromise his principles. He doesn’t give up the fight when things get tough. After he’s captured by the police and thrown into a maximum security prison, he tells the other inmates, “None of you understand. I’m not locked up in here with you. You’re locked up in here with me.”

Man oh man, do I love me some Tulip O’Hare. One of the greatest female leads ever. In a world of crazy vampires, evil Christian cults, serial killers, and psycho swamp hillbillies, not to mention actual angels, demons, God, the Saint of Killers, and oh yeah her boyfriend has a power greater even than God’s in his head, somehow the only ‘normal’ person more than holds her own.

This badass, hard drinking and harder fighting, gun toting pile of sass and curse words is the coolest, strongest, unkillable (unless you’re Jody, of course) bitch around. Not to be messed with.

That’s it for part 3! If you missed parts 1 and 2 you can find them here and here! Join us for Part 4 where we will talk about Aquaman, She-Hulk, and the Atom!