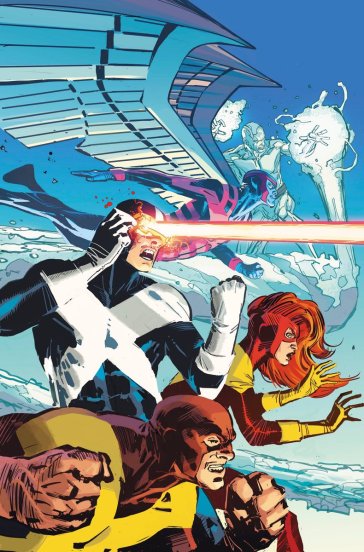 Man, did I love this book. As a huge fan of the X-Men, and the original five in particular, this was probably my favorite title growing up and I combed through every long box at every comic store, antique store, yard sale, flea market, convention, etc I could find until I had every issue. The original X-Men reunite when Jean Grey is discovered alive, but they’ve all been apart and changed so much since her ‘death’ that at first they’re like a square peg in a round hole, but over time they start to gel and help each other through some of the hardest times each of them have ever had, bonding more as a family than ever before, and oh yeah, saving all of our collective asses from Apocalypse and the like. The original team stayed together, more or less, in this incarnation for 70 issues. In that time there are a TON of awesome, memorable moments, many of which are cemented as part of X-Men, and Marvel, lore. So narrowing it down to five was pretty hard. I’ll probably do another five down the line, because there are so damn many!

So, without further ado, and in no particular order, my five coolest moments from the first 70 issues of volume 1 of X-Factor:

Reunited and it Feels So Good…

Even though they are not even close to being on the same page at the start it’s nice to see the old X-Men together again, especially with the newly returned Marvel Girl. Yeah, I would have liked to see them face off against Magneto like they did back in X-Men issue 1, but they wanted to set up the new status quo of them publicly pretending to be mutant hunters that would actually try to help them out. So while Rusty Collins isn’t exactly a showstopper when it comes to the conflict, it’s really just great to see the characters back together again.

So the X-Men had the biggest, baddest arch-villain of them all in Magneto, so as adults they wanted to give them another super badass to be their main enemy. The original writer’s idea? The Owl.

No, you’re not thinking of the wrong guy. It’s this guy from the Daredevil books. They wanted THIS GUY to be X-Factor’s big bad:

Now, don’t get me wrong. I actually like the Owl as a villain quite a lot. As a Spider-Man/Daredevil villain he’s very effective. But against X-Factor? Any one of them could kick his ass, much less all five of them. He just wasn’t nearly enough of a threat to be the main antagonist for a team. Also, what possible ties would the Owl have to a mutant book? Just weird.

ANYWAY, history lessons aside, Louise Simonson and Jackson Guice created Apocalypse to be the new Magneto-level pain in the ass for a favorite muties. Apocalypse, unlike the Owl, is much more than a match for our heroes. To make matters worse, he also delegates a lot of his works to his Horsemen, which really stacked the deck against X-Factor. The Horsemen are bad enough, and now you’ve got to deal with this nearly immortal asshole who has control over his every molecule so he can create basically any weapon/accessory he desires, can control his size and density, and is basically telepathy proof? Fucking hell.

This mega-powerful, mysterious, Darwinian mutant would not only become a hit within the title, where the confrontations would grow to be more and more personal and intense, but would become one of the most popular, enduring villains in Marvel history. Actually, a LOT of events that would heavily impact Marvel history started right in this very title, such as Cyclops’ son being corrupted (by Apocalypse, of course) with the techno-organic virus and sent to the future so he could survive, only to return as the adult known as Cable, and a coupe other things we’ll get to here. 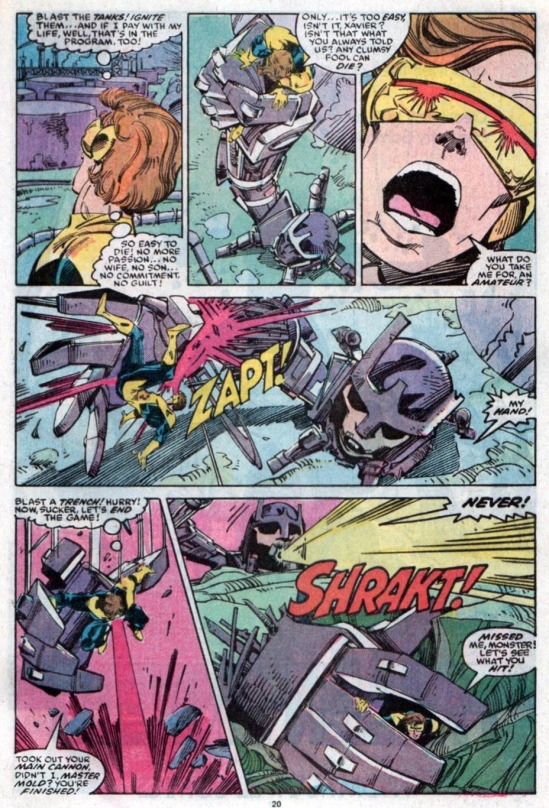 So I think it’s pretty obvious that I think Cyclops is the coolest. One of the reasons I really liked this book so much is that it did two things I always wanted X-Men to do:

Regarding that second point, there are four moments in particular that stand out that show how awesome Cyclops is. The first would be his fight with the Master Mold sentinel, which is epic and awesome, especially when you consider that thing had just taken out a whole team of X-Men.

The second would be his dismantling of Apocalypse’s Horsemen during the Fall of the Mutants story. He really lays it all on the line and pulls some really awesome moves out while kicking their asses.

Third would be the absolute decimation of Mr. Sinister during the Inferno story. Sinister was one of the most powerful foes any of the X-Men had ever faced, at least until Cyclops got pissed off:

Finally would be when he did pretty much the same thing to Apocalypse himself. The big A had infected Cyclops’ son with a virus that was a death sentence; there was no cure. When Apocalypse starts attacking Jean Grey, who is trying to soothe baby Nathan, Scott really opens up on his ass, and for a while Apocalypse was actually thought dead! 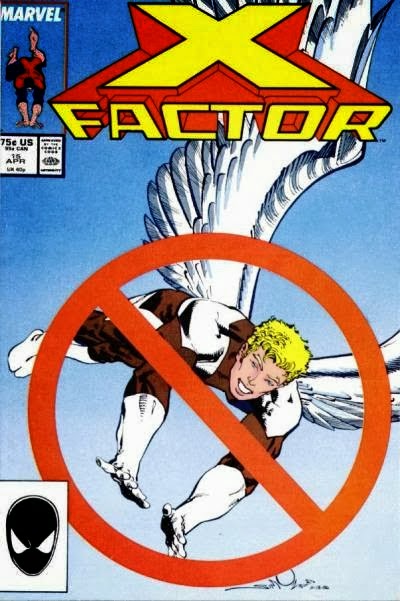 One of the things that really sent Chris Claremont’s X-Men into the stratosphere, popularity-wise, was the death of Jean Grey. It added a lot of pathos to the characters and really upped the stakes. Suddenly it felt like death was a very real possibility for the characters, which made each conflict seem that much more important.

When Louise and Walt Simonson took over the title it really took off, and one of the things they did early on was dismantle and kill (seemingly) Warren Worthington III, the Angel. During the event the Mutant Massacre, he tries to fight the Marauders by himself (which would be a tall order for the whole team, really) to buy time for some Morlock children to get to safety. His wings are crushed, then he’s pinned to a wall by them. The damage is so severe that doctors have no choice but to amputate them. Beaten and without the ability to ever fly again, Warren seemingly commits suicide.

The book went nuts after that, as you can imagine. Like, holy SHIT, I can’t believe that just happened! What could possibly come next? Well about eight or nine issues later Apocalypse debuted his new Horseman… 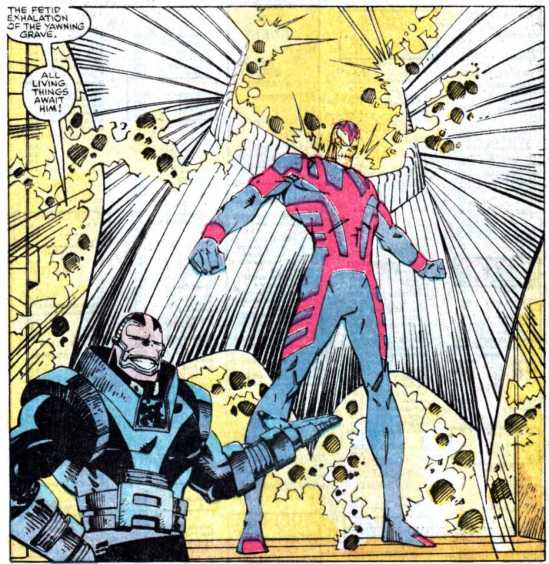 Shortly after the Angel’s apparent suicide Apocalypse and his Horsemen started an attack in Manhattan. They were joined by the newest and most powerful Horseman: Death.

Death could fly at supersonic speeds and had wings so razor sharp they could cut through steel, and when he flaps his wings he can fire ‘feathers’ that are basically just insanely sharp knives. Oh, they’re coated with a deadly neurotoxin, as well. So that’s fun.

When X-Factor is able to make it aboard Apocalypse’s ship they are confronted by the big A and his newest pet. Apocalypse taunts them with his true identity:

Eventually Warren would regain some sense of self and reject Apocalypse, but the damage had been done. The Angel was dead, and something much darker and much, much scarier had taken his place.

This upgrade paid off big-time for Marvel. Angel went from an afterthought to one of the ‘hot’ characters of the late 80’s-early 90’s. He was brooding, angst-y, unpredictable, violent, and bloodthirsty, but with enough of the old Warren left to try to fight against what could be argued is now his true nature. His transformation gave the character, and the book, an edge it had lacked, it made the rivalry with Apocalypse much more personal, and it gave future writers a whole new area of X-lore to play around in.

(For a sense of just how awesome Archangel is I highly recommend Craig Kyle and Chris Yost’s ‘X-Force’ and Rick Remender’s ‘Uncanny X-Force’. Both are required reading for fans of the character, and really comic book fans, period).