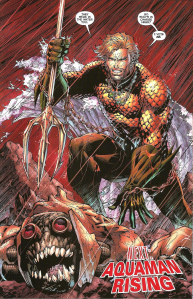 Last, but (surprisingly) no longer the least is none other than AQUAMAN, reimagined by the master of revamps, Geoff Johns (who also singlehandedly fixed everything previously wrong with the Green  Lantern saga and I highly recommend his entire GL series, which is actually still cannon btw). Aquaman has long been the ass-end to many a punch-line in pop-culture references. Whenever a comedian bashes super heroes, Aquaman is exhibit A, a fact that Johns actually exploits and embraces, but ultimately he succeeds in proving everyone is completely wrong. Aquaman is by no means a lame character, however he has been done an injustice on more than one occasion. 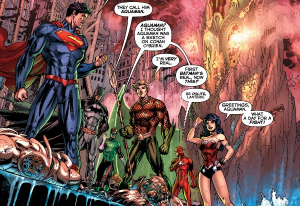