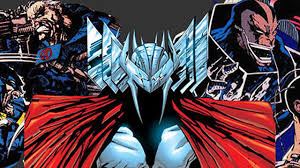 Story: Hoo boy. This story is 1990’s X-Men at its peak, for better or worse. If, like me, you were reading all 4 of the titles involved in this crossover, then this was awesome. But if you were a causal fan, or just reading one or two of the books, this was a damn disaster. The story begins in Central Park, at a free concert by mutant musician Lila Cheney. At one point in the concert there is a break, and Professor X gives a speech about tolerance and how mutants are just like normal people, blah blah. Attending the concert are Storm, Bishop, Rogue, and a disguised Archangel. So a woman that can control the weather with her thoughts, a time-displaced militant mutant with the ability to shoot lazers from his hands, a woman that can kill you with a touch, and a flying cutlery drawer. Yeah, they’re just like us, Charles.

Sadly for the Professor, he is suddenly shot in the chest by what appears to be Cable! Before the X-Men can react he teleports out, leaving Charles for dead. This stuns the mutant world, as Cable has been affiliated with X-Force and before that the New Mutants, and is part of the X-family, albeit not directly. This ESPECIALLY stuns X-Force, who have not seen Cable in months and a) can’t believe what he’s done, and b) know that they’re going to be everyone’s first stop on the ass beating train.