Growing up, all of my friends liked the X-Men. We loved pretty much all of them, even Longshot and the Dazzler (I know. Shut up). Everyone loved Nightcrawler, and Iceman, and Colossus, but it seemed like everyone’s favorite was always Wolverine. While I think Wolverine is cool, I always thought Cyclops was way cooler. I dunno, maybe it’s because I can’t help but think that a really short, hairy Canadian shouldn’t be the star of the show, but I digress. There were always a few writers who portrayed Cyclops with the respect he is due, like Louise Simonson, Joss Whedon, Chris Claremont, and maybe Scott Lobdell. Too often he was written as this stiff, do-gooder with a stick up his ass; always the buzzkill.

Anyway, I wanted to take a quick moment to show people what pretty much every telepath in the Marvel universe knows: Cyclops is a badass. 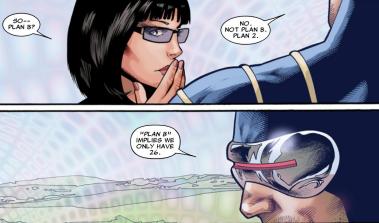 Honorable Mention: “I Want This Thing Off My Lawn” (Astonishing X-Men 7) – Cyclops decimates a Sentinel with a humongous optic blast, prompting a speechless Colossus and an astounded Wolverine. 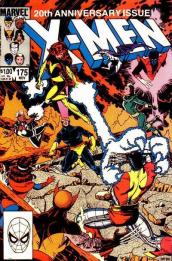 Cyclops and his wife (by the end of the issue) Madelyne Pryor are being manipulated by that old dickbag, Mastermind. He makes Cyclops think Madelyne is the Phoenix come back to life (close, but no cigar!). When Cyclops comes to the X-Men (he was currently on sabbatical) for help, Mastermind makes them all think that Phoenix has somehow hitched a ride with Cyclops, and attacks him (actually just Mastermind psychically attacking him). When Professor X hooks himself to Cerebro to alert other that the Phoenix is back, he is electrocuted. Mastermind then makes the X-Men think that Phoenix has killed everyone in the Shi’Ar Empire, and then the Fantastic Four and the Avengers!

Cyclops wakes up, and having figured out what was going on, goes to warn the X-Men. Mastermind then makes them think that instead of Cylcops, they’re seeing Phoenix! They attack him like crazy, full of rage. Cyclops has to fight off Shadowcat and her dragon Lockheed, Storm, Wolverine, Nightcrawler, Rogue, and Colossus! And he does! He uses his knowledge of their skills and attack patterns to blast the living fuck out of them, one at a time, until he puts Rogue’s hand on the unconcious Xavier, allowing Charles to speak telepathically to the X-Men, exposing the Mastermind’s ruse. 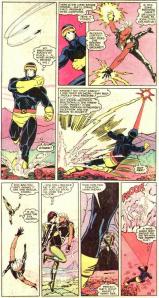 The moral of the story is: don’t mess with Cyclops.

The Master Mold. The strongest, most intelligent Sentinel ever built. It had recently  completely owned the X-Men, which consisted of Storm, Havok, Colossus, Wolverine, Psylocke, Rogue, and if I’m not mistaken, Dazzler. So who takes it out? Our boy Cyclops, that’s who! By his own damn self!

He immediately knows he’s in deep shit. He doesn’t have the rest of X-Factor with him (Angel, Beast, Iceman, Phoenix). He’s half crazy, because he has just been told his wife Madelyne and his son Nathan were blown to smithereens, along with his house. He’s seen the house, and there is nothing left. He had recently left them to help form X-Factor, and to reunite with Jean Grey, and was feeling particulalry scummy about that decision (which he should have).

He was about to tell X-Factor he had to quit and go back to them when he gets the news that they’re dead. Naturally, he doesn’t take it well. In fact, forget what I said earlier about him being ‘half crazy’. He’s rounding home to ‘totally crazy’. 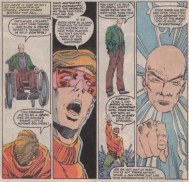 When Master Mold attacks him, he’s in Alaska near some oil derricks. He blasts away at the Master Mold’s legs, cutting it’s range and mobility dramatically, then goes to work blowing off one of the arms and any weapons he can see. All the while, trying to manuever the Master Mold into place so he can blow it to hell. Eventually he gets it where he needs it, and blasts the oil derricks, causing one hell of an explosion. The blast damn near knocks him out. When he regains his senses, he realizes that he can hear something big scraping around in the smoke. It’s the freaking Master Mold, and it’s now just a head with a hand as like spider legs underneath it, using some fingers to run around, and the others to try to kill Cyclops. Eventually he just gives it everything he’s got, and the damaged Master Mold is destroyed.

If you follow the X-books at all, you know that perhaps the biggest bad of them all is the ancient mutant Apocalypse. He’s one of the X-Men’s worst enemies; he’s immortal-or close enough to it- and his power is complete control over his molecules. If he wants to fly, he grows wings. If he wants to be taller, he becomes taller. If he wants to shoot giant blasts of destructive energy out of his hands, guess what? He does. He has ruined, or at least tainted, a number of X-Men: Archangel, Cyclops, Wolverine, Cable, and Polaris, to name a few. He has taken out large groups of X-Men at the same time on more than one occassion. He either wins or comes close enough to winning for his tastes every time he does anything. Accept for this one time.

X-Factor, featuring the original X-Men (Cyclops, Beast, Iceman, Archangel, Phoenix), were Apocalypse’s biggest enemies, and vice versa. Over what he did to Archangel alone, he was always going to be one of their most hated enemies. But then he went a step too far. A pretty fucking huge step. Apocalypse kidnapped Cyclops’ son, Nathan, and took him up to the moon, where he had made his new base at the site Jean had originally sacrificed herself (Dark Phoenix Saga). X-Factor, completely outraged, pursue immediately. After a few run-ins with Apocalypse’s new footsoldiers, the Dark Riders, X-Factor teamed up with the royal family of the Inhumans (Black Bolt, Medusa, Crystal, Karnak, Gorgon, and Triton) in order to strike at Apocalypse with overwhelming force.

The battle is quick and brutal, and eventually Apocalypse has captured X-Factor and is enjoying his greatest triumph. He taunts the team as they are incapacitated, and reveals that no matter what they do, he has won. He has infected baby Nathan with a techno-organic virus, which will slowly eat his human form and replace it with a mechanical one. Out of their minds with rage, X-Factor bust free and start throwing down.

Unfortunately for them, Apocalypse has made himself like 30 feet tall, and really isn’t in the mood to lose. While Iceman, Beast, and Archangel are fighting, Cyclops is protecting Phoenix and his son. She has gone into his mind to try to help him fight the virus. As soon as she ‘finds’ him, Apocalypse attacks her on the psychic plane! The bastard had booby-trapped little Nathan’s brain so that any intruder would have to fight Apocalylpse one-on-one! All things considered, Jean Grey is a super powerful mutant. At this time, however, she was not empowered by the Phoenix force. Well, technically she was, but it was dormant. So she is no match for Apocalypse, and she knows it. Add to this the fact that she is spending a considerable amount of power helping Nathan, and she is nearly overwhelmed in seconds.

Instinctually, and knowing that he would welcome the chance, Jean forcibly yanks Scott’s consciousness into the confrontation. He immediately sees his soon to be wife and his son being attacked by his worst enemy since Magneto, and he goes a bit nuts. Everyone gets all impressed when Wolverine’s tiny, smelly ass kills a few people with his hand knives, but that shit pales in comparison to when a guy with the power of a nuke behind his eyes forgets his self control. Infuriated beyond belief by what has happened to his son (a death sentence) he and Jean attack Apocalypse on the psychic plane, and push him out when Cyclops blasts him with a Phoenix-powered optic blast. At the same time he does this on the psychic plane, he UNLEASHES on Apocalypse in the ‘real’ world, killing him. With one shot.

Well, as close to you can get to killing Apocalypse.

I went into a lot more detail in my review of “Inferno”, so if you really want to know what was going down in this fight, read that. All that matters regarding this list is this: Sinister was single handedly (well, he had help from a possessed Polaris) DOMINATING both the X-Men (Storm, Colossus, Wolverine, Havok, Dazzler, Longshot, Rogue, and Psylocke) and X-Factor (Cyclops, Beast, Iceman, Phoenix, and Archangel).

He had Cyclops on his knees and in telekinetic shackles, and was taunting him.

Polaris was torturing Colossus by bending him in wild-ass angles and directions. Phoenix was unconcious, and Sinister was taunting Scott with her, as well. EVERYONE else was either unconcious or hurt. Through a psychic link with Psylocke they all deduce that Sinister has gone out of his way to make sure that Scott doesn’t attack him.

He doesn’t seem to care what the rest of them do. So they enact a plan to free Cyclops, and with a single blast does THIS to a guy that had been destroying the hell out of a dozen X-Men:

I’m going to eventually do a review of Joss Whedon and John Cassaday’s brilliant “Astonishing X-Men”, so I don’t want to give away a ton of details about this one, but essentially the X-Men (Cyclops, Emma Frost, Wolverine, Shadowcat, Armor, Beast, and Colossus) are stuck on an alien world in a completely no-win situation. Cyclops comes up with a plan to get captured and fuck shit up from the inside out, and all he has to do is die! Knowing the aliens from Breakworld will revive him to get the knowledge in his head, he allows his space ship to be shot to shit, and he is set adrift in outer space with no suit or anything. When he ‘wakes up’, he is being tortured by the ruler of the planet. Oh! I should also mention that at this point, he has lost his powers. No visor, no optic beams.

When Powerlord Kruun (the ruler) figures out that Cyclops has tricked him, he screams “WHAT OTHER LIES HAVE YOU TOLD!?!” to which Cyclops responds with a nasty smile, and then blasts the living FUCK out of the guy’s face, from point blank. He turns his blast upward, and it rips through every single floor of the tower he and a few other X-Men are in, eventually going out the top and so high up, so brightly, that it becomes a beacon seen for miles and miles.

Emma, Scott’s new girlfriend after Jean’s second death, immediately links the X-Men telepathically, and Cyclops says a line that Xavier’s always saying, “To me, my X-Men.”

Joss Whedon definitely appreciated Scott Summers and his uber badassness, and this was the best example.