Mavel’s mighty mutants have had quite a number of members under the banner of ‘the X-Men’. Not all have been called X-Men, specifically, but they are all allied under Charles Xavier’s dream, or at least some derivative of it. Generation X, Excalibur, X-Force, X-Factor, the New Mutants or the X-Men themselves, they’re all pretty much one huge family. One huge, huge, super dysfunctional family. Each team has had many iterations over the years, and everyone has their favorites, but today we are going to take a look at our votes for our 10 favorite rosters!

Honorable mentions to the government sponsored X-Factor, X-Statix, the original New Mutants, the New X-Men (both the Grant Morrison penned main X-Men and the teenagers around the time of House of M), Wolverine & The X-Men and the post-Dark Phoenix Saga rosters.

Note: for the purposes of this list we are only counting teams from the 616 universe, or the ‘main’ Marvel Universe. So, no Age of Apocalypse teams or Age of X teams or Days of Future Past in this one!

END_OF_DOCUMENT_TOKEN_TO_BE_REPLACED

Chris and Erik try and rank all the X-Men movies (so far!)

*Note: when this episode was recorded (several months ago), we hadn’t yet seen “New Mutants”, but we reviewed it on the previous episode (Issue #8). We also discuss Tom King’s “Mister Miracle”, Chip Zdarsky’s “Spider-man: Life Story”, our initial thoughts on “The Three Jokers”, and speculate about the Snyder Cut (see Issue #7 for our review on that one).

For more random shenanigans, check out our blog at ComicZombie.net – including our X-Men Movie articles!

*Also listen to us on Podcasters Assemble!

END_OF_DOCUMENT_TOKEN_TO_BE_REPLACED

COMIC ZOMBIE – Issue #8: Invincible and Falcon and the Winter Soldier!

Chris and Erik discuss more Immortal Hulk comics, rumors surrounding the new John Stewart “Green Lantern” film as well as the HBO Max live action ‘Green Lantern Corps’ series, the “New Mutants” movie, the new “Mortal Kombat” movie, and finally we do a deep dive into both “Falcon and the Winter Soldier” (Disney +) and the all new “Invincible” animated series (Amazon Prime) based on the comics by Robert Kirkman!

*NOTE: We are painfully aware that Peyton Reed is NOT directing the upcoming MCU Fantastic Four feature film; at one point he was rumored for the position which excited us, but the actual director for the upcoming film is the director of the newest Spider-Man films, Jon Watts. For shame.

For more random shenanigans (like Erik’s Invincible reviews and our recent MK character breakdowns), check out our blog at ComicZombie.net and GeekToGeekMedia! *Also listen to us on Podcasters Assemble: MORTAL PODKAST!

END_OF_DOCUMENT_TOKEN_TO_BE_REPLACED

The X-Men have had a lot of members over the years. A LOT. Especially when you consider all of the spin-off teams, like the New Mutants, X-Factor, X-Force, and Excalibur. There have to be around 100, maybe more. But if you aren’t overly versed in X-Men history, how are you to know your Josephs from your Rogues? Your Skins from your Storms? Well, I’ll help you out a bit and give you the 25 best members of the X-Men and their ancillary teams.

END_OF_DOCUMENT_TOKEN_TO_BE_REPLACED

Story: We are rapidly getting to the point where the X-Men franchise is nearly impenetrable to new readers (aka the 1990’s), and this story kind of points to that. You need to know a lot about who everyone is and what their relationships are outside of this story, so people who maybe thought this would be a nice gateway into the X-books was probably bleeding from the ears, eyes, and nose by the end of the story.

END_OF_DOCUMENT_TOKEN_TO_BE_REPLACED

In part 1 I briefly looked at the X-Men’s first foray into the crossover: the Mutant Massacre, which saw Angel get his wings destroyed, Wolverine fight Sabretooth, Psylocke join the X-Men, Colossus, Nightcrawler, and Shadowcat leave the X-Men. Not normally known for resting on their laurels when they find something that resonates with the fans, Marvel got with the X-office and told them to do another big summer crossover. They ended up giving us…

The Fall of the Mutants 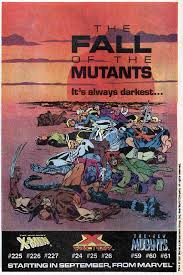 END_OF_DOCUMENT_TOKEN_TO_BE_REPLACED

Ever since Marvel published Secret Wars back in the early 80’s both Marvel and DC comics have made a habit, for better or for worse, of crafting giant stories that involve multiple titles and characters. The kings of this trend for a long time were the X-Men. Nearly every year all of the X-Men titles would cross over with each other, and most of the time there were more than a few titles. A lot of really big developments have happened in these events/crossovers, which I will discuss as I get to them. First up, I will be looking at the X-Men and their crossovers, starting with….