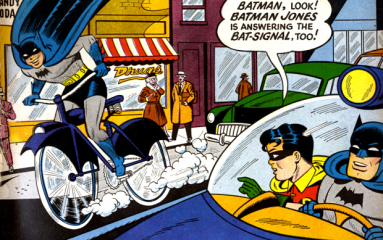 Ladies and gentlemen, I present to you: Batman Jones.

As a baby, he was saved by Batman, so his parents named him… Batman. Way to go, Mr. and Mrs. Jones.

So this doofy kid grew up introducing himself as “Batman Jones”, and when he got older he decided he wanted to be a crime fighter, just like his namesake.

Hahaha what in the fuck?

I wish- SO BADLY- that like Grant Morrison had brought him back and treated it seriously. He would have been horribly murdered like immediately.