On today’s episode we’re discussing the anime anthology, “Star Wars: Visions” (now streaming on Disney+), the two-part finale of Marvel’s “What If…?” (also on Disney+), and a quick breakdown of DC Fandome’s new trailers for “The Batman” and “The Flash”!

Also on this episode:

For more random shenanigans, check out our blog at ComicZombie.net

For more of us talking about Star Wars, check out the all new episode of Podcasters Disassembled on “Rogue One”!

*Also listen to us on the latest season of Podcasters Assemble! (and hit us up on Instagram @ComicZombiePodcast!)

END_OF_DOCUMENT_TOKEN_TO_BE_REPLACED

The Comic Zombie Podcast – Issue 2: “Spock with a goatee and other Tales from the Multiverse!” 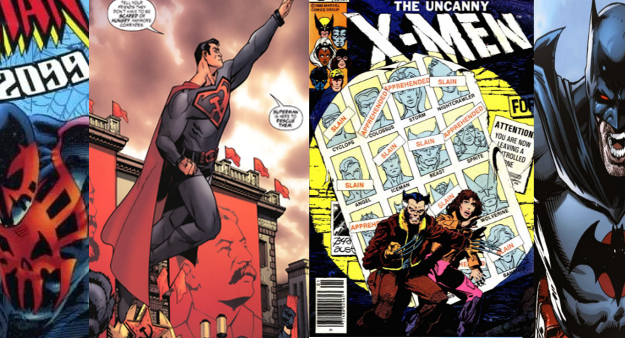 Chris and Erik go quantum leaping through the multiverse as they discuss their favorite alternate reality/timeline stories from comics, such as ‘Flashpoint’, ‘Days of Future Past’, ‘Old Man Logan’, ‘Dark Knight Returns’ and others… 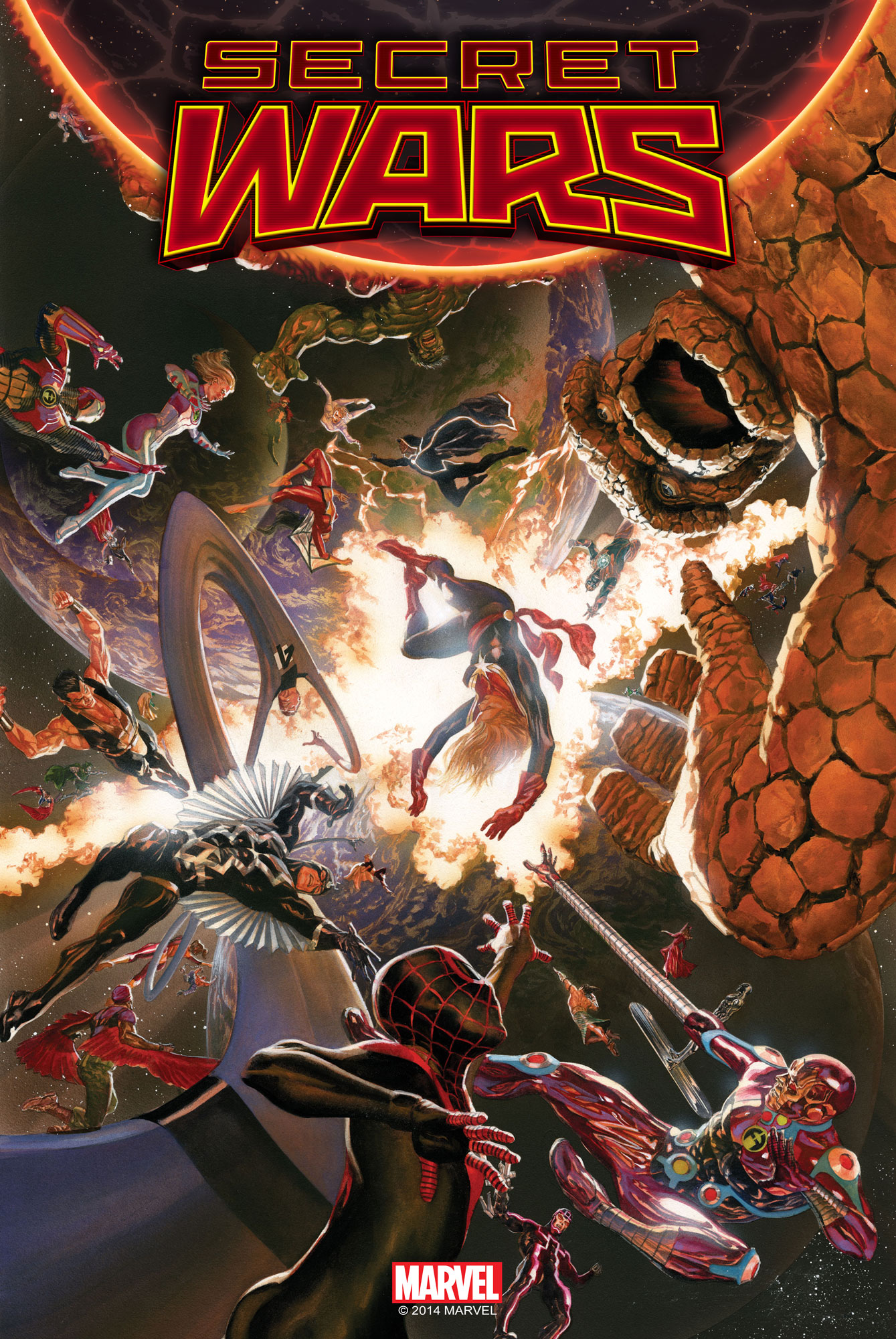 Both Marvel and DC (and really most publishers) from time to time will throw a lot of their characters (sometimes nearly all) together for a really big story. These have been dubbed ‘event’ titles. Books like Final Crisis, Blackest Night, Metal, Civil War, Spider-Verse, and many, many others have their fans and detractors, but you can’t deny that they provide some of the coolest, most intense, most unforgettable moments in comics history.

Everyone has their favorites, but here are 50 of the best moments (in no particular order). If you have any favorites that we neglected to include, sound off in the comments.

END_OF_DOCUMENT_TOKEN_TO_BE_REPLACED

One thing super hero comics seem to do very well is to depict alternate realities and alternate versions of their characters. Wonder what would happen if the X-Men failed to stop the advancement of Sentinel technology, or if Apocalypse succeeded in taking over the world? There are stories you can read for that. Want to know one of the possible futures for the Hulk, or Superman? There’s stories for that, too. Dating back to X-Men: Days of Future Past (which even predates the Terminator films!), comics have continuously used the possible future outcomes as a way of depicting the stakes for our heroes if they lose, and as a way to show how one change in the timeline, no matter how seemingly small, can cause massive ripples in what we think of as reality.

They are also used as a way to show your favorite characters in new situations and surroundings without messing with the core character and material, a la the Age of Apocalypse.

Here are my picks for the 15 best alternate realities/timelines from Marvel and DC comics:

15. Teen Titans: The Future Is Now

Geoff Johns is the most accomplished, and probably most popular, writer for DC Comics. He is well known for titles like Action Comics, the Flash, Green Lantern, JLA, JSA, 52, Infinite Crisis, Forever Evil, and Flashpoint. But the title that typically slips between the cracks is his awesome run on Teen Titans, and the best arc was “The Future is Now”.

After teaming up with the Legion of Super Heroes, the Titans are trying to get back to their own time, but arrive a few years later than they would have liked. They try to go back to their HQ, but are surprised to find that it is occupied by the Justice League, which is made up of adult versions of themselves!

END_OF_DOCUMENT_TOKEN_TO_BE_REPLACED

DC Comics has pretty much always been about changing things up. They rebooted their entire line more than a few times, they have replaced beloved characters with ones nobody cared about, they have dragged their icons through the mud on numerous occassions. They’ve let titles like JLA, JSA, and Teen Titans spend so much time floundering that it should be considered criminal. But there are a few things they’ve done over the years that drove me crazy, and I was able to narrow it down to the 5 most glaring (to me). Keep in mind that these aren’t the 5 worst moves DC has ever made, but the ones that I disliked the most. So, in no particular order….

DC has always had this thing that they do. First, they lose control of how streamlined their universe is. Then, they compound the problem by adding retcons, and new characters replacing old ones, and revamps. Then, realizing that this has left a bigger mess, they have a “Crisis” and come out of it with a new universe. After the first, “Crisis on Infinite Earths”, Supergirl and the Flash were dead (among others), and they relaunched their books (or at least their characters) with new origins, and the previous decades of stories no longer ‘counted’. Then, about ten years later, the same problem had happened. They had lost control of their universe, and the titles were suffering. Rather than doing the Marvel (aka ‘smart’) thing, namely getting top talent on your titles and telling them to go nuts, DC decided the real problem wasn’t the way the books were being made, but rather that they just all needed new blank slates (again). So there was “Zero Hour”, which led to the deaths of a lot of people, most notably the Atom, Hourman, and Dr. Midnite from the JSA. After Zero Hour everything was rebooted (AGAIN). Cut to 15 years later, and DC is doing pretty darn well. Their books are as good as they’ve ever been, they have A list creators working for them, and they’re exploring movie options for a number of them. But still, they decided they needed a clean start (albeit not a complete reboot, more like a… restructuring), so along came “Infinite Crisis”, which didn’t so much reboot everything as it let them fix some continuity problems that they had. It actually made the entire line stronger, but that wouldn’t last…

A few years later DC has squandered almost all of the good will they had built with fans from projects like Identity Crisis, Infinite Crisis, 52, etc. After “Countdown”, and the mind-boggling handling of the Flash, the Justice League, Superman, and the Teen Titans, DC decided it was time once again to have a crisis. Enter Grant Morrison and Final Crisis, a story about what happens to the Earth when gods from another planet start to manifest here. While that’s a cool story idea, the execution was, to say the least, flawed. Rather than a straightforward story, we got a metaphysical wankfest from Morrison, who had much more interest in writing about the strength of myths and stories rather than any kind of ACTUAL story. It was a huge mess, and really killed any momentum that was left from the Infinite Crisis days. 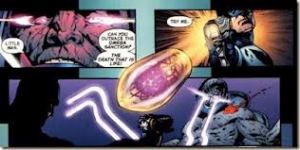 Not only was the story a mess, but it was completely forgettable. It had no real lasting effect on any of the DC titles, not even Batman, who ‘died’ in Final Crisis. Well, that is if you read Final Crisis. If you were just reading Batman, it was clear that SOMETHING happened to him, but damned if anybody could figure it out. Not that it was some super-well written mystery, but it just didn’t make any damn sense. Finally, the fans started to speak with their money, and started dropping DC titles like they were made of dead babies and AIDS. This led to Warner Bros, DC’s parent company, to do some corporate restructuring, including bringing in Bob Harras as the new Editor-in-Chief. Bob was once the EIC at Marvel, and promptly ran them into bankruptcy. As soon as he was in charge at DC we saw him implement HIS idea for how DC should reboot (again. For the THIRD time in less than 10 years)…..
END_OF_DOCUMENT_TOKEN_TO_BE_REPLACED